When it comes to cuisine, India is a land of diversity, with each region boasting its own unique dishes and flavors. Curries are a staple of Indian cuisine, and can be either gravy- or stew-like, usually made with meat, vegetables, or cheese. Many Indian dishes also include legumes, which add protein and creaminess to the dish. The most defining characteristic of Indian cuisine though is its use of spices. In fact, many spice mixes used in Indian cuisine contain up to five different spices! A popular spice mix is garam masala, which generally includes cardamom, cinnamon, and clove. Other common spices used in Indian dishes include mint, coriander, and fenugreek leaves. While Indian cuisine is often associated with being "spicy," this isn't always the case. Rather than just bringing the heat, spice blends are used to enhance both sweet and savory dishes alike. Indian cuisine is one of the most diverse and interesting in the world. There is something for everyone, whether you are a meat-eater, vegetarian or vegan. Your team will love the variety of options available to them!

Planning a group event and need a hassle-free way to order food? Look no further than CaterCow! We have a wide selection of individually-packaged Indian meals that are sure to please everyone. Plus, our group order poll feature allows you to send out a survey to all attendees so that everyone gets exactly what they want. 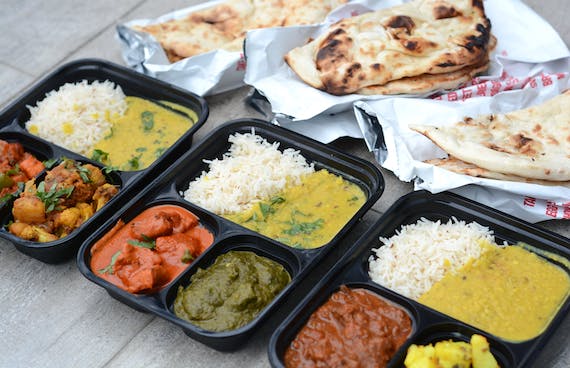 If you're new to Indian cuisine, you're in for a treat! There are many delicious and popular dishes to choose from. For meat-eaters, some of the most popular options include chicken tikka masala, butter chicken, chicken korma, and lamb vindaloo. If you're looking for a vegetarian option, saag paneer (spinach and cheese) is a great choice. And for vegans, aloo gobi (potato and cauliflower) or chana masala (chickpeas in masala sauce) are both delicious options. However, it's important to be aware of your colleagues' sensitivities to certain aromas, as Indian food can have a strong scent that can quickly fill up a small space. 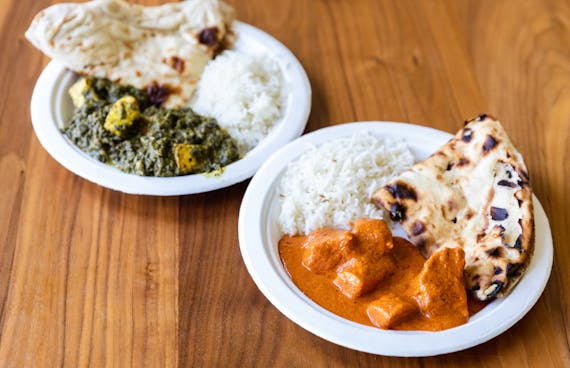 Typically, a single individually packaged meal will be enough for any one person but if you have some colleagues with big appetites or folks who are prone to forgetting to place an order, we always recommend ordering a few extra meals. Your guests will appreciate the thoughtfulness and you'll avoid a potential awkward moment. 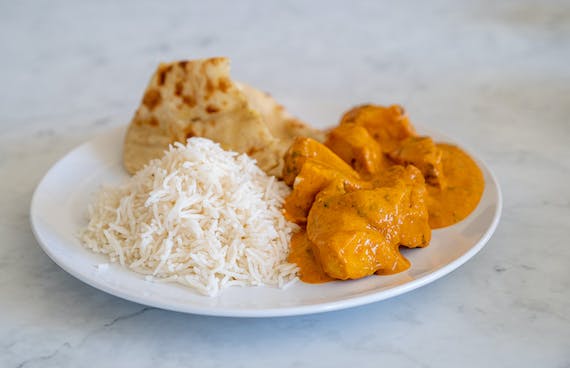 Can I Order Individually-Packaged Indian Meals for my Gluten-Free Guests?

You're in luck! There are plenty of delicious choices available, but you'll want to avoid ordering naan or fried appetizers like samosas. If you're not sure if a dish is gluten-free, just look for the (GF) indicator next to it on the menu.

...more Sides that are popular with Indian cuisine include samosas and pakoras. These are typically vegan, as well as gluten-free due to the use of chickpea flour. For dessert, try kheer, a traditional rice pudding made with basmati rice, milk, sugar, cardamom, and raisins.

How close should I plan my delivery time to my eat time?

...more Meal times should be a time to relax and enjoy good food, not to worry about your food becoming lukewarm. Thankfully, with Indian cuisine, you don't have to worry about hot and cold items mixing and ruining your meal. However, as with any food that is delivered in plastic containers, condensation can affect certain items such as samosas and naan bread. We recommend waiting no more than 15-20 minutes after delivery to eat your meal.

Are there vegetarian and vegan options for individually-packaged Indian meals?

...more There are plenty of vegetarian and vegan dishes to choose from that will make all of your guests happy. Curries and rice dishes are typically hearty and filling, loaded with vegetables and spices for an exciting alternative to a boring salad. To know if a dish is vegan or vegetarian, look for the (VG) or (V) indicator next to each item.

What ingredients are in Individually-Packaged Indian?