Sushi started out as street food in Japan in the 8th century. But it wouldn’t arrive in the US in earnest until the 1960s with the opening of Kawafuku in Los Angeles’ Little Tokyo. Consisting of seasoned rice and seaweed wrapped around a variety of ingredients including raw fish, tempura, fruit, and vegetables, sushi’s rising popularity signaled a change in the American palate. TV dinners and “meat and potatoes” style offerings were fading and giving way to more luxurious types of cuisine. The creation of the California roll, sushi filled with imitation crab and avocado rather than raw fish, accelerated sushi’s standing as its flavors were a bit more accessible. Now sushi has become a go-to option for diners looking for something quick, easy, and affordable. And due to the variety of ways to customize any sushi roll, your team will love a sushi platter buffet lunch!

CaterCow is different from other catering platforms. We create menus that are easy to customize. Sushi platter buffets are highly customizable, which makes them perfect for a team with broad preferences and dietary needs. Group orders polls will help you care for your team all year long and ensure that everyone is able to order exactly what they like! 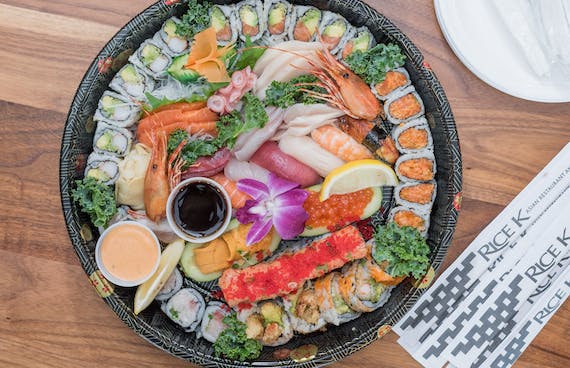 Here is some quick sushi terminology: maki is the traditional sushi roll most think of when ordering sushi. Sashimi is raw slice of fish with no rice at all. Nigiri is raw fish on top of a small clump of rice. You’ll rarely get brown rice sushi because it’s not sticky enough. Sushi rice is very sticky and has a vinegar flavor to it because it is made with rice vinegar. Though most fish can be served raw, shrimp is always cooked and that’s why it is typically pink/red. Raw shrimp is gray. A good reminder that not all sushi is raw fish! 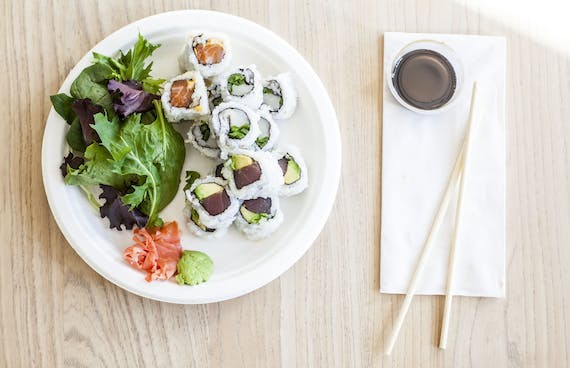 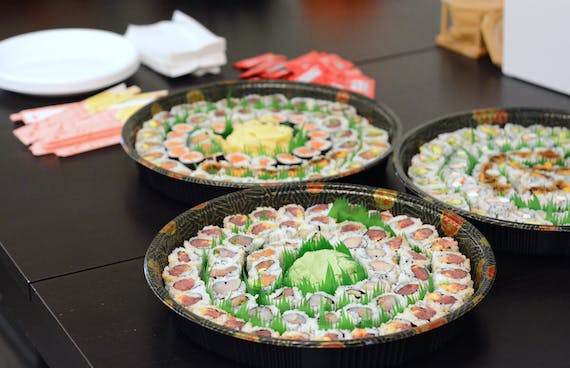 Where can I find sushi burritos or poke?

Sushi burritos were created by Peter Yen in the 2000s in San Francisco but we file them under Hawaiian on CaterCow! That’s because sushi burritos and poke are frequently included on the same menus for Hawaiian restaurants.

How much should I order for my team?

...more Most sushi rolls are 6 pieces and the average person is typically satisfied with around 12 pieces. Specialty rolls such as Dragon Rolls and Spider Rolls are larger and have premium pricing. Those options are often 8 pieces. For a more filling meal, we recommend ordering an average of 18 pieces per person on your team.

Are there vegan and vegetarian options for Sushi platter buffets?

...more Yes! Many rolls are not filled with any sort of fish or meat so your vegan and vegetarian team members can enjoy alternatives such as cucumber, jalapeno, avocado and more!

What ingredients are in Sushi Platter Buffet?