Hawaiian cuisine is frequently associated with poke and fresh fish but the region is home to a colorful culinary history. It is a pastiche of the many cultures that have called the Hawaiian islands home. European, American, Chinese, Filipino, Japanese, Korean, Puerto Rican, Portuguese influence and more can easily be found amongst the variety of dishes. The result of this smorgasbord of influence is a varied approach to cooking that fuses the sweetness of the islands’ yams, coconut and sugarcane into traditional ethnic dishes such as pasteles, cha siu bao, bento boxes and malasadas. As time has worn on, Hawaiian regional cuisine has grown to include Spam musubi, a spin on Japanese onigiri, and loco moco, a rice dish topped with hamburger meat, a fried egg and brown gravy. Hawaiian BBQ catering is a much rarer offering than many are used to but your team is sure to love this unique mix of sweet and savory flavors.

Hawaiian BBQ catering doesn't have to be a hassle. With our easy-to-use platform and delicious menu options, you can find the perfect restaurant for any occasion. Whether you have dietary restrictions or just want a delicious and convenient meal, CaterCow has you covered. Take the stress out of your next event and let us take care of the food!

Typically when ordering Hawaiian BBQ catering, you'll want to order 2-3 entrees such as kahlua pork (slow-cooked and shredded, yum!) and pineapple chicken along with 2-3 sides like Hawaiian rolls, steamed veggies and fried rice. 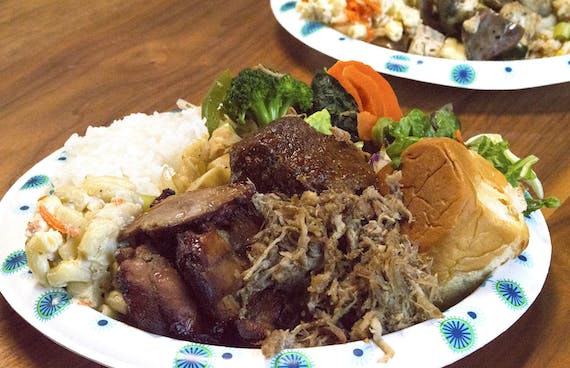 We strongly suggest that you order food for more people than are in your party for buffet-style catering. The reason is that often times people toward the front of the line tend to take more food than they mean to because it looks like so much is available. But restaurants are portioning a specific amount per person and anyone who takes extra might be leaving someone else without lunch. To avoid this, we recommend ordering 10-15% higher than your headcount or taking advantage of the "extra protein" option when available! Everyone has a different idea of what a "full portion" looks like. It's better to be safe than hungry! 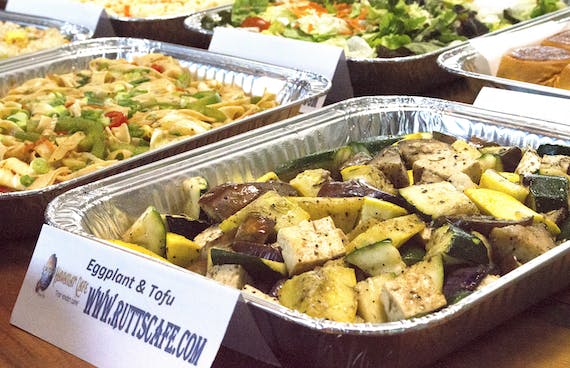 What does "loco moco" mean?

The iconic Loco Moco dish was first created in 1949 at a restaurant in Hilo, Hawaii. In response to requests from a group of budget-conscious teenagers, the restaurant came up with an alternative to the sandwich that was quick and easy to prepare. The original dish consisted of rice topped with a hamburger and gravy, with a fried egg added later. The teenager named the dish after a friend whose nickname was "Crazy." One of them was taking Spanish and suggested "Loco" instead. "Moco" was then added because it rhymed and they liked the way it sounded. Now, this simple but delicious dish has spawned countless variations over the years.

Are there vegan and vegetarian options available for a Hawaiian BBQ Buffet?

...more While your vegetarian and vegan guests won't be able to partake in the fish or meat options available, most restaurants will have eggplant and tofu options that will work for them. Look for the (V) and (VG) designations to ensure that your selections are vegetarian or vegan.

...more Many items in a Hawaiian BBQ buffet are gluten-free but you will need to be mindful of dishes prepared with soy sauce or breaded and deep-fried. Look for the (GF) indicator next to each dish to know if the item you are selecting is gluten-free!

What ingredients are in Hawaiian BBQ Buffet?