Bread, pickled vegetables, mayonnaise and meat - the banh mi is made of humble ingredients but it has a history as rich as the whole of Vietnam. After the defeat of their French colonizers in 1954, the Vietnamese would put their own spin on the ingredients introduced to them by the Europeans. Mayonnaise and vegetables replaced the butter and meats popularized by the French and the Vietnamese were able to make the banh mi a food for the everyman rather than the ruling class. After the fall of Saigon in 1975, the Vietnamese spread throughout the world with many landing in the United States bringing their food traditions with them. Quickly food carts and restaurants began to pop up as Vietnamese communities grew in cities like San Diego and Houston. And even now the ingredients remain the same - bread, pickled vegetables, mayonnaise and meat.

Indivdiually-Wrapped and Platters of Banh Mi Vietnamese Sandwiches by City

Looking for a quick and easy meal option? CaterCow has you covered! Our menus are designed with convenience in mind. Whether you're looking for a traditional banh mi sandwich or something a little different, we have something to fit your needs.

All kinds of sandwiches can offer up an almost infinite amount of options and banh mi sandwiches are no exception. Their unique blend of vegetables, meats, spices and bread is sure to be satisfying for your team. In most cases, one sandwich will be enough for anyone but if you’re ordering buffet-style, it’s best to order for a few more than your headcount to account for the number of extra folks who might be enticed by these savory sandwiches! Keep dietary needs in mind, though! Fish sauce and mayonnaise is prevalent with banh mi sandwiches! 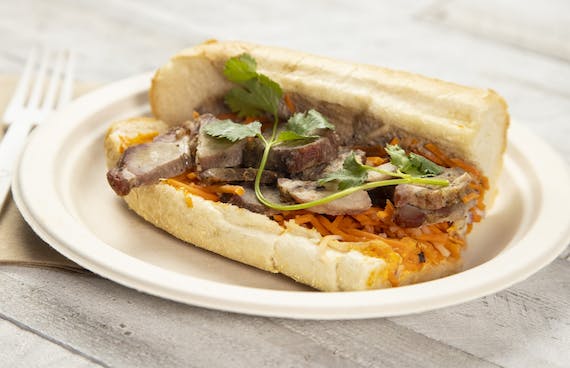 What can I expect from Vietnamese cuisine?

Vietnamese cuisine is world-renowned for its use of fresh, flavorful ingredients. Fish sauce, soy sauce, rice, fruits and vegetables are all staples of Vietnamese cooking, and herbs and spices like lemongrass, lime and kaffir lime leaves add an extra zing to dishes.

What does "banh mi" mean?

All together, “bánh mì” means "bread” or “baguette." It comes from the combination of the Vietnamese words “bánh” meaning "cake/pastry" and “mì” meaning “wheat."

Are there vegan and vegetarian options for Banh Mi Vietnamese Sandwiches?

...more Yes! Banh mis can be made with vegetables in lieu of an animal-based protein. But for vegans, it is important to specify "no mayo" as that is the most popular condiment for banh mi sandwiches.

...more Unfortunately, it's unlikely that any Vietnamese restaurant is offering banh mi sandwiches with gluten-free bread so it is unlikely that your gluten-free team member will be able to partake unless an alternative such as a rice or salad bowl is offered. Look for the (GF) indicator next to a dish to know if it is gluten-free.

What ingredients are in Indivdiually-Wrapped and Platters of Banh Mi Vietnamese Sandwiches?