In recent years, Thai cuisine has become increasingly popular in America. This is due in part to the growing number of Thai people living in the United States, which has doubled in the past 15 years. And there is an interesting reason behind that influx: a campaign by the Thai government to promote and standardize Thai flavors around the world. In the early 2000s, the Thai government began training chefs and sending them to open restaurants in other countries. These restaurants introduced the complex flavors of Thai cuisine to a wider audience, and helped to boost tourism to Thailand. Today, you can find Thai restaurants serving a familiar blend of exotic spices, spicy chilies, and peanut garnishes over hearty noodle and rice dishes. So next time you're looking for a delicious and unique meal option for your team, give Thai food a try!

Here at CaterCow, we design our menus to set you up for success when ordering Individually-Package Thai Meal Boxes

CaterCow Thai meal boxes are likely to include combination of a protein such as chicken, beef or tofu and an entree base such as noodles (i.e. pad thai, drunken noodle or pad kee mao, pad see ew), fried rice (i.e. basil fried rice, pineapple fried rice), curries (i.e. green curry, red curry, yellow curry), and stir-fries (pad eggplant, pad string beans). With some dishes, whether or not the rice comes on the side will vary. For stir fries, often the rice is not separated from the rest of the entree but for curries, the rice will always come on the side. If you're worried that a meal box alone won't be enough, order sides such as salads or dumplings for your team! 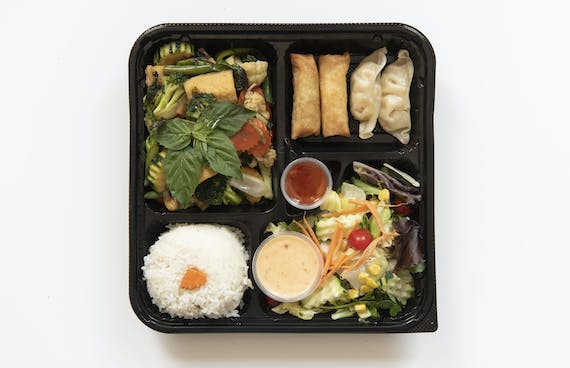 What can be expected when ordering Thai cuisine?

Thai food is incredibly diverse, with dishes that can be sweet, salty, spicy, or sour. There are many dishes that feature thick noodles, vegetables, and chicken, lamb, shrimp, or beef. Some dishes are primarily rice-based, while others contain fruits such as pineapple or papaya. Peanuts and spicy chillies also are frequently found in Thai dishes. No matter what your taste buds are craving, there's sure to be a Thai dish that will satisfy them. 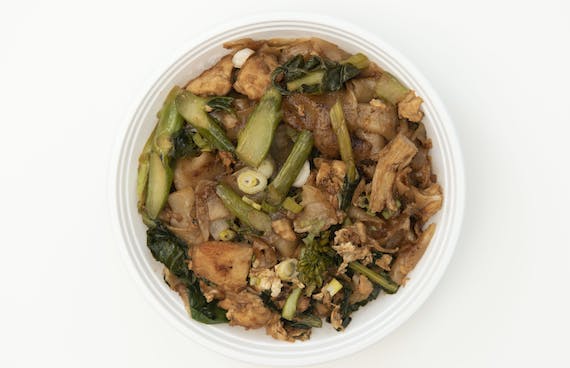 What does "pad" mean anyway?

When it comes to Thai cuisine, there are plenty of dishes that come with the word "pad" in them. Pad Thai is the most popular of these dishes, and "pad" simply means "fried" so "pad Thai" is a stir-fried noodle dish. Interestingly, pad Thai is not even Thai in origin but instead a Chinese noodle-based stir fry that was infused with traditional Thai flavors.

Is it possible to order gluten-free Thai meal boxes?

...more It is! Noodle dishes in Thai cuisine are typically rice noodles rather than wheat, so they are gluten-free. But keep in mind that many dishes are made with soy sauce which is not gluten-free. Look for the (GF) indicator next to a dish to know if it is gluten-free.

Are there vegan and vegetarian options for individually-packaged Thai meal boxes?

...more Yes! Many Thai entrees can be made with tofu or vegetables. Be careful though because some dishes can include fish sauce! Just look for the (V) or (VG) designations on each item as you put your order together!

What ingredients are in Individually-Package Thai Meal Boxes?