The history of Indian cuisine dates back over 5000 years. Throughout the centuries, Indian food has been influenced by various cultures, including Mongolian, Persian, and Chinese cuisines. The common thread that runs through all of these influences is the distinct mixture of spices that gives Indian cuisine its flavor and aroma. Indian ingredients are as varied as the people themselves, and the available foods vary depending on region. Certain dishes use specific spice blends, known as masala. For instance, birlyani masala—which is made up of cardamom, cinnamon, cloves and fennel—is used for birlyani, an oven-cooked dish of rice and a vegetable, seafood or meat. Oftentimes, Indian cuisine is associated with being “spicy” but that is not always the case. These blends of spices enhance the sweet and savory dishes they are added to rather than just bringing the heat. From butter chicken and lamb vindaloo to saag paneer and chana masala, Indian cuisine features a great blend of dishes for meat-eaters, vegetarians and vegans alike. Your team will love the bevy of options available to them!

Looking for some delicious and easy catering options for your next event? Look no further than CaterCow! Our Indian cuisine options are to please everyone. Plus, our hassle-free ordering process makes event planning a breeze. So whether you're hosting a small gathering or a large party, we can accommodate your needs. 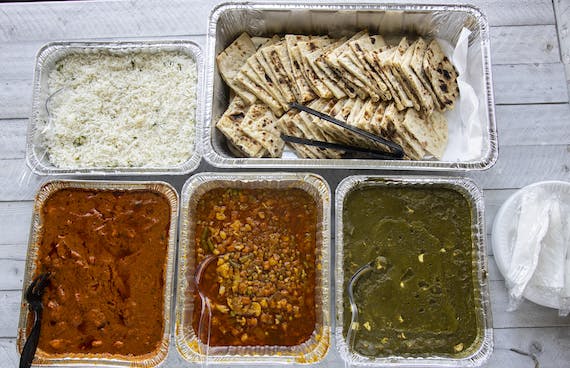 If you're new to Indian cuisine, some of the most popular dishes are typically chicken tikka masala, butter chicken, chicken korma, and lamb vindaloo for meat-eaters. The most popular vegetarian option is usually saag paneer (spinach and cheese), while the most popular vegan dish is typically aloo gobi (potato and cauliflower) or chana masala (chickpeas in masala sauce). However, it's important to make sure that none of your colleagues are overly sensitive to certain aromas, as Indian food can have a distinct scent that can take over small spaces. 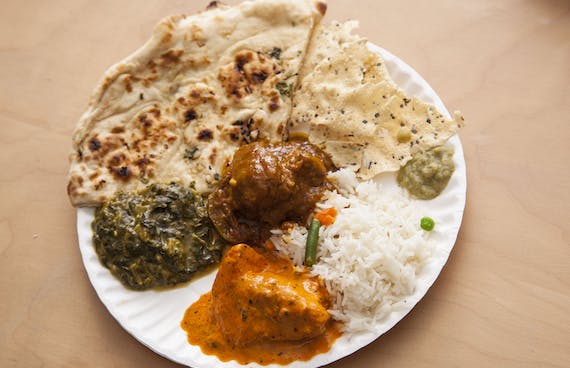 Be Sure to Order Enough!

We always recommend ordering extra food for buffets, as people often take more than their fair share. Typically, 10-20% higher than your headcount will suffice. Proteins especially can be cut inconsistently, leading to some guests getting larger portions than others. Additionally, it's a good idea to order more buffet-style sides than you think you need. Everyone’s definition of a "full portion" can vary widely. 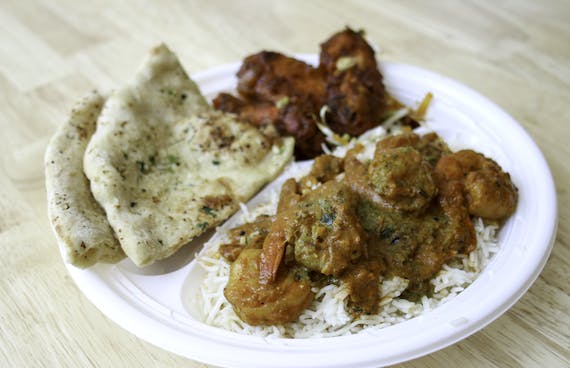 Can I Order an Indian Buffet for my Gluten-Free Guests?

Absolutely! Indian cuisine has many options for gluten-free guests but you'll want to avoid over-ordering naan or fried appetizers such as samosas. If you'd like to know if a dish is gluten-free, just look for the (GF) indicator next to the item.

What goes well with Indian Buffets?

...more Popular sides for Indian buffets are samosas (typically vegan) and pakoras (typically, vegan and gluten-free due to the use of chickpea flour!). For dessert, try kheer, a traditional rice pudding made with basmati rice, milk, sugar, cardamom, and raisins.

How close should I plan my delivery time to my eat time?

...more Luckily, Indian cuisine doesn't feature a mixture of hot and cold items that can sometimes cause dishes to become lukewarm. However, as with any buffet style meal that travels in aluminum trays, condensation can affect certain items such as samosas and naan. We recommend planning your eat time no more than 15 or 20 minutes after delivery.

Are there vegetarian and vegan options for Indian buffets?

What ingredients are in Indian Buffet?