Poke is a Hawaiian dish that has been around for centuries. It originally consisted of cubes of raw fish served over whatever other ingredients were available. Over the years, it has evolved to include marinades made from soy sauce, ginger and other seasonings. Poke bowls are a modern version of this ancient dish, featuring raw fish served over a bed of rice with other toppings such as avocado, pineapple, cucumber, jalapeño and more. Similarly, sushi has been a staple of Japanese cuisine for centuries but the sushi burrito offers an exciting play on those traditional flavors by mixing it into a fun to eat burrito format. Both options offer up a playful twist on fast casual dining that is sure to satisfy your team's tastebuds!

Looking for a delicious and easy-to-use catering option? Look no further than CaterCow! We have a variety of menu options perfect for any occasion, including poke bowls and sushi burritos. Plus, we're proud to be able to accommodate any dietary needs you may have. So whether you're looking for a hassle-free meal or something specific, CaterCow has you covered. 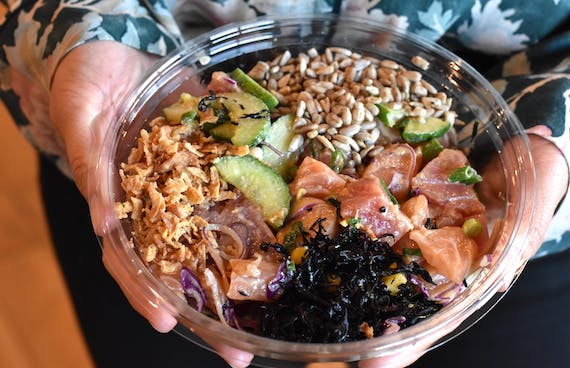 So What's the Difference between Japanese & Hawaiian Poke?

While Japanese sushi and Hawaiian sushi burritos & poke bowls have a lot of ingredients in common, they are definitely distinct culinary experiences. Sushi in Japanese cuisine tends to focus on the quality of the fish being served, complementing the natural flavors of the protein with the ingredients around it. Meanwhile, in Hawaiian food, poke bowls and sushi burritos will marinate and dress the proteins in a variety of sauces (soy sauce and chipotle mayo are two of the most popular). Furthermore, there is a larger emphasis on texture for Hawaiian poke bowls and sushi burritos - think chewy fish, soft rice, crisp veggies & seaweed, crunchy toasted garlic, and creamy chipotle mayo all mixed into one bite. Japanese sushi and Hawaiian poke bowls & sushi burritos just approach food in different ways with similar ingredients. Either way, your team is in for an explosion of flavor! 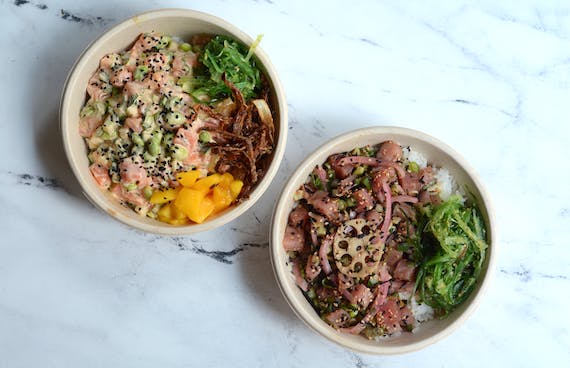 Even though these meals are individually packaged, we recommend ordering a few extra meals! You never know when someone might show up unexpectedly at the office. With our group order poll, you can easily add extra meals at checkout before placing your order. 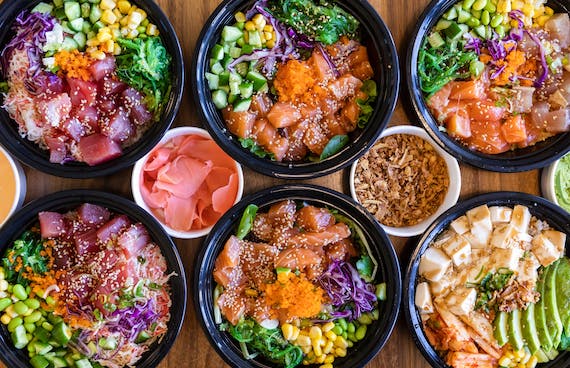 Don't worry! Many restaurants will offer chicken, beef and cooked salmon as an alternative to raw fish!

Can I order a "Build Your Own Sushi Burrito Bar?"

What goes well with Sushi Burritos and Poke Bowls?

Are there vegan and vegetarian options for Sushi Burritos and Poke Bowls?

...more Yes! Sushi burritos can be filled without any sort of fish or meat so your vegan and vegetarian team members can enjoy alternatives such as cucumber, jalapeno, avocado and more! Similarly, fish is not required for a poke bowl.

What ingredients are in Sushi Burritos and Poke Bowls?